A downloadable game for Android

Play exciting room-scale games while actually walking through them using your own feet and experience a new level of immersion.

Magical worlds, puzzles, traps, enemies and much more. Surprise your friends with a custom-made gallery. Challenge other players. Become the best in each world by beating existing challenges. Due to procedural generation no game is ever the same.

Create and share your own worlds using the world builder, with the help of a great community.

Have fun playing my game!

Get it on App Lab or through SideQuest!

This looks amazing, but I can't get it to work with SteamVM/WMR.  I tried using the Inject feature with Revive, but it just crashes.  Any chance it might be updated, or is there some specific steps I could try?  I would love to try this out!

Thanks! I had one person so far who succeeded with Revive but that was quite a while ago so I guess it is broken somehow. What I should really do is to add a SteamVR compatible build. I will put this higher on my list of priorities as I'd love to support more headsets. So far I have been building the core and didn't want to branch out too much into all the work for supporting and updating all headsets. But now the time has finally come :-)

That would be awesome!  Thank you!  I have the HP Reverb G2 and would be happy to report back once I get it working.

I just had someone report in the Discord that Revive works for him! He gave me a short description and screenshots. Are you able to get it running with these steps as well? See here: https://github.com/WetzoldStudios/traVRsal/wiki/Revive

If you have further questions please feel invited to join the Discord (https://discord.gg/67fNz4F)!

I can get it to launch, but it's a flat window.  Nothing in VR, no reaction to HMD or controllers.  Is there some hidden menu or key commands I should try?  I'm on the Discord channel now too, but haven't gotten a solution yet.

For future visitors, it all ended up fine.  I think reinstalling Revive ended up doing the trick, but regardless it runs nicely now!

Reply
Space·Time Will Tell2 years ago(+1)

I spent an hour lost in your impossible spaces and enjoyed that hour very much!

I wonder if your engine/sdk would support a handheld mirror, because I can very well imagine a horror/survival game in which you need to look before you enter a corridor, to be sure that nothing is lurking in it :)

That is a very nice idea! I think it should be possible to do mirrors. It's a nice technical experiment actually. And a horror world is something that many have asked for so that is high on my list :-)

Hi I'm really intrigued by use of impossible spaces in VR! I love Tea For God, if you know of that one. I was wondering if you have any plans to bring this to PCVR, with a detection of the available play space to enable play in rooms that have wired VR but some space to walk around. Tea For God and Shattered Lights are two good examples of VR games with impossible spaces that each have different solutions for enabling play in a defined roomscale space.

I had a discussion just yesterday when a good point in time would be to release for other platforms. Publishing to Rift is for me mostly pressing a button but I had feared a bit the additional testing process and build times. I will give it a try later this week now that there is a concrete request :-) Do you have a Rift?

I have a Rift S (And don't have a Quest :p). Ah that is great to hear! Looking forward to giving this a try I hope!

I watched the play-through of shattered lights now. I did not know it before but wow that is a gorgeous looking experience! I added it to my field research list. Thanks for the tip!

My pleasure, yeah I enjoyed it :) Thanks for sharing your list. I have one other game to suggest, that I'm not sure would go on your field research list but maybe. Called Host. https://store.steampowered.com/app/828240/HOST/
From what it sounds like it's similar to the last one on your list, in that it doesn't use portals or non-euclidean geometry. It's a roomscale game on Steam that requires you to have ~3m x 2m playspace (I think you can get away with a little less). But it utilizes the space really well, with beautiful art and immersion, and uses 'sinking through the floor to a new layer' as its form of redirected walking. It's very short but very enjoyable imo.

I just released an experimental PCVR version for Oculus Rift in case you want to give that one a try!

Game ran smoothly. I liked the pyramid section much more than the training grounds. I think there's room for this to be differentiated more from Tea for God, but also could learn some things from it. The spaces in the training room especially felt a bit TOO impossible, ie. I was feeling the 'walking in circles' vibe a little too much. I think more dynamic objects like elevators and other things that make you feel like you're turning a corner into a new area would improve that a lot. I think what I liked more about the pyramid section, other than the general aesthetic being better, was that it felt a bit more mysterious and I think it was more often that I turned corners into something a little different from where I was just walking.

Overall it's a good start! I think if you expanded in the direction of exploration and puzzling and looked to innovate the fledgling 'impossible-space genre' in those areas, you could really come out with something interesting, and it would be differentiated from Tea for God!

Oh and I liked that you could actually fall in a couple parts where you were walking across a pathway crossing a pit that was inside your playspace to fall into. I of course had to try walking on air, and sure enough I fell, and it was a little scary and intense xD I liked it, and it made me actually nervous about falling after that. I do think though maybe you'd want some option to make for a non-intense fall, for those prone to motion sickness (but I liked the regular/intense fall, so I hope you leave that in as an option at least even if you do make a 'comfy' option!)

Thanks a million for this valuable and detailed feedback. This really helps to prioritize. You can expect lots of great things still to come.

My pleasure, good luck with the development :) 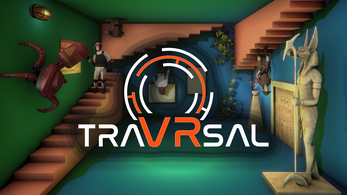